Short Peptide and its Use in Modern Medicine

Conventional drugs have been a blessing. They address health problems, increase the quality of life, and prolong the lifespan of users. However, they sometimes cause unwanted side effects that may be mild, severe, or even life-threatening. This is where short peptides come in handy.

Peptides are short chains of amino acids (AAs) – the body’s fundamental building blocks – that handle the bioregulation of many activities in the human body. They are often confused with proteins because proteins are also made up of strings of amino acids that are equally linked together by peptide bonds. However, both biomolecules have a huge differentiating factor, and it is size.

The difference between short peptides, long peptides, and proteins

Peptides consist of far fewer AAs chains than proteins, which is why they are often referred to as short peptides. Generally, short peptides consist of 2-50 small fragments of AAs [1]. These small chains of AAs may be sourced from plants or animal products like soy, oats, meat, milk, eggs, fish, etc. Peptides with chains of less than 10 or 15 AAs belong to a class of biomolecules called oligopeptides. Tetrapeptides, tripeptides, and dipeptides all fall under this class of peptides.

Conversely, proteins consist of lengthier chains of AAs, often ranging from approximately 50-100 AAs. It is for this reason that they are called long peptides. It is worth noting that most peptides that occur naturally in the body consist of around 20 AAs [2]. Proteins may also be referred to as complex polypeptides, especially if they consist of several chains of amino acids all linked up. Hemoglobin which is found in the red blood cells is a perfect example of a protein. Its structure comprises of 4 individual chains of amino acids.

What are the benefits of using short peptides?

Today, it is possible to synthesize both the short and long peptides, but the former proves to be of more medical relevance. This is linked to their smaller size, which enables them to penetrate the skin, and the walls of the intestines more efficiently and accelerate entry into the bloodstream. 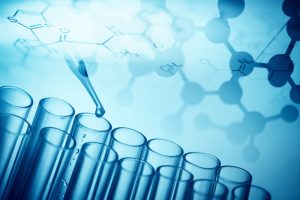 One other reason short peptides are considered more attractive and promising therapeutic agents is their unique safety profile. Unlike conventional medicines, they do not accumulate in organs such as the kidney or liver but are recycled by the body. It is based on this unique feature that they pose relatively far fewer toxic side effects [3].

What can be treated with short peptides?

Recent studies reveal that bioactive peptides may be used for the safe treatment of a wide range of diseases. They are believed to be capable of  [4]:

Besides anti-aging, microbe destruction, and reduced inflammation, scientists have been looking to score specific therapeutic points using peptides. Such points include:

With 347 million people worldwide who have diabetes, the urgent need to regulate blood sugar cannot be overemphasized. Insulin is a peptide hormone that maintains normal glucose levels in the blood. It is usually taken as injections in the skin to help patients maintain insulin levels akin to those in the average human body.

Exenatide is a famous peptide-based therapeutic agent produced for the safe bioregulation of blood sugar levels in patients with type 2 diabetes. It is approved by the Food and Drug Administration (FDA) as an injectable drug for this singular purpose and marketed under the brand name, Bydureon, and Byetta.

The drug works by stimulating the pancreas during times when the blood sugar levels peak. This leads to the production of Insulin, which in turn, transfers the excess sugar from the blood into the cell or tissues requiring energy [5];

Cyclosporine is an acid-peptide used to suppress organ rejection in recipients during kidney, heart, and liver transplants. It is an immunosuppressant that slows down the body’s immune system, which fights foreign bodies, including new organs [3]. The drug is often administered either orally, or into a vein through a needle and syringe. The FDA also approves it for the treatment of Crohn’s disease, rheumatoid arthritis, nephrotic syndrome, and psoriasis;

Collagen peptides are used medically to improve skin health and decelerate aging. They may stimulate melanin production, protect the skin from sunburn, increase firmness, improve wound healing, and clear acne. Findings from clinical trials indicate that this kind of peptides may also hydrate the skin and improve its elasticity. It is based on this study that many pharmaceuticals into anti-aging cosmetics include them in their products;

Creatine peptide supplements may help to build strength and muscle mass; new research on older adults reveals. The study involved 53 male participants with a mean age of 72.2 years placed on the supplements while carrying out resistant training for 12 weeks.

At the end of the study, a significant increase in muscle strength was observed in participants who combined the training with collagen peptide compared to those who combined it with a placebo [6]. Today, an increasing number of fitness enthusiasts combine these supplements with resistance training for more significant results;

Anyone can suffer from bone loss. Bone deterioration begins to occur after reaching one’s maximum bone mass (between age 30-50), and for many individuals (especially women), it may lead to osteoporosis. Osteoporosis is the continuous loss of bone mass that leads to fragility and increased risk of fracture [7].

Results from clinical trials on growing rats who were subjected to running exercise indicated an increase in bone mass [8]. While this may mean that similar results may be witnessed in humans treated with collagen peptides, more research needs to be carried out.

There is ongoing research into the potentials of antimicrobial peptides for accelerated wound-healing. This is coming after studies have shown that collagen peptides may reduce inflammations by acting as anti-oxidants. Since it improves skin health and elasticity, it may facilitate a faster healing process of wounds.

The perspectives of using short peptides in modern medicine

The use of peptides in modern medicine by pharmaceuticals has seen a markedly upward trend. They currently represent a billion-dollar market and is projected to surpass US$ 60 billion by 2026. However, the boom has only been suppressed by one issue — the low absorption of peptides in the gastrointestinal tract when administered orally.

Strong acids in the stomach destroy or break them down before they can enter the bloodstream. Research is ongoing to bypass this limitation but at the moment, alternative approaches like direct injection into the veins or subcutaneous applications are being used [9].

Hopefully, in the future, we will experience a breakthrough; short peptides that can be administered in a tablet or fluid form will be created.

Sleep is everything! It directly influences daytime energy, emotional balance, and productivity, but it is tied to a very vital hormone called melatonin. Although this…

Peptides are one of the current trendy skincare ingredients that prominent dermatologists agree can reverse the signs of ageing and promote youthfulness. However, many cosmetic…

According to the WHO, they are today more than 168 million and around 3.5 million respectively (English article, which was published on the 23rd of…

Peptides for Skin: What are Peptides & How They Help with Skincare

Every day, new creams, moisturisers, and cleaners are introduced by skincare brands, each promising to be far superior to any other on the market. This…